The knee joint is a synovial joint which connects the femur (thigh bone), the longest bone in the body, to the tibia (shin bone).  There are two main joints in the knee: 1) the tibiofemoral joint where the tibia meet the femur 2) the patellofemoral joint where the kneecap (or patella) meets the femur. These two joints work together to form a modified hinge joint that allows the knee to bend and straighten but also to rotate slightly from side to side.

Anatomical terms allow us to describe the body and body motions more precisely. Instead of a doctor simply saying that “the patient’s knee hurts”,  he or she can say that “the patient’s knee hurts anterolaterally” to specify where exactly in the knee you are having pain.  Identifying specific areas of pain helps to guide the next steps in treatment or work-up. Below are some anatomic terms doctors use to describe location (as applied to the knee):

Structures often have their anatomical reference as part of their name, particularly if there are other similar structures close by. For instance, there are two menisci (or meniscus, singular) in the knee. As such, they are named the medial meniscus and lateral meniscus. Therefore, the medial meniscus would refer to the meniscus on the inside of the knee (i.e. closest to the other knee).

Structures of the Knee 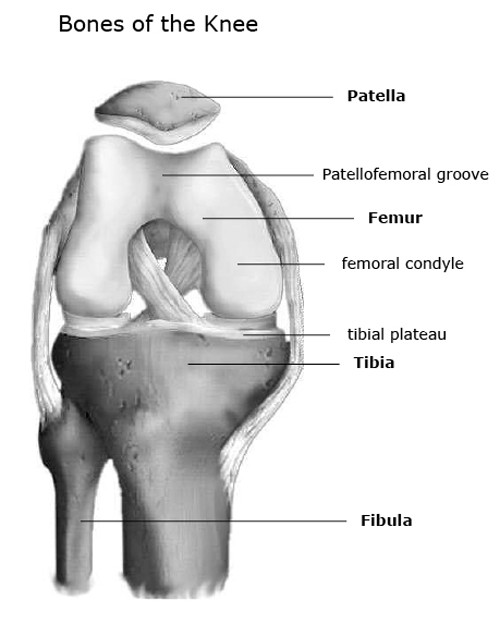 Again, the knee joint is a hinge type joint. The part of the door that keeps it secured to the wall and allows it to open and close is called a hinge. The majority of the movement allowed by the knee is the same type of motion allowed by a door hinge. It additionally allows for a small amount of rotational movement.

If you think of the knee in layers, the deepest layer is bone and ligaments, then ligaments of the joint capsule, then muscles on top. Various nerves and blood vessels supply the muscles and bones of the knee.

Bones of the Knee

There are four bones around the knee: the thigh bone (femur), the shin bone (tibia), knee cap (patella), and the fibula (see image to the left): 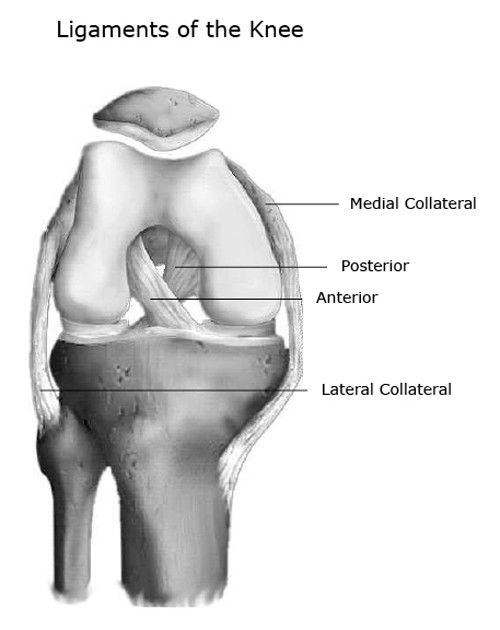 Ligaments in the knee

Ligaments are strong, tough bands that are not particularly flexible. The function of ligaments is to attach bones to bones and to help keep them stable. In the knee, they give stability and strength to the knee joint as the bones and cartilage of the knee have very little stability on their own.

The pair of collateral ligaments keeps the knee from moving too far side-to-side. The cruciate ligaments crisscross each other in the center of the knee. They allow the tibia to “swing” back and forth under the femur without the tibia sliding too far forward or backward under the femur. Working together, the 4 ligaments are the most important in structures in controlling stability of the knee. 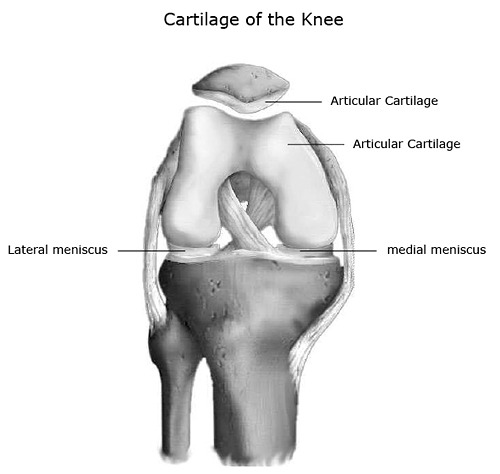 Cartilage of the Knee

There are many types of cartilage in our body, each with a slightly different function. For instance, the medial and lateral meniscus (discussed below) are made up of fibrocartilage which make them strong and rubbery and able to add additional stability to the knee.  On the other hand, like bones of most joints, the end of the femur and tibia and the undersurface of the patella are covered in hyaline cartilage. Hyaline (also known as articular) cartilage is both flexible and slippery. The flexibility helps it to act as a shock absorber. Articular cartilage is made even more slippery by an oily lubricant made within the joint, called synovial fluid. This allows the two bones to move smoothly on each other without pain. If this articular cartilage wears away, joint movement can become painful and limited (this is known as arthritis). Unfortunately, cartilage has almost no blood supply and is very bad at repairing itself.

In a healthy knee, the rubbery menisci act as shock absorbers. They both sit on top of the tibia and help to spread the load of the femur over a larger surface area on the tibia. If the menisci are removed (because they are torn, etc.) the underlying articular cartilage sees a heavier load and is at risk of wearing down faster (i.e. development of osteoarthritis)

Additionally, together, the menisci create a shallow socket on the tibia that accommodates the end of the femur. This assists with knee stability.

Muscles Around the Knee

The muscles around the knee help to keep the knee stable, well aligned, and moving. There are two main muscle groups around the knee: the quadriceps and the hamstrings. The quadriceps are a collection of 4 muscles on the front of the thigh and are responsible for straightening the knee by bringing a bent knee to a straightened position. The hamstrings are a group of 3 muscles on the back of the thigh that provide the opposite motion by bending the knee from a straightened position.

The iliotibial band is a broad tendinous extension of the tensor fascia lata and gluteus maximus that also helps to stabilize the knee.

Tendons in the Knee

Tendons are elastic tissues made up of collagen. They are the continuations of muscles and allow them to connect to bones. There are numerous tendons around the knee that also help to stabilize the knee. They are associated with muscles discussed in the section above (see above).  One of the most important tendons is the quadriceps tendon. This lies on the front of the knee and connects the quadriceps muscles of the thigh to the tibia via the patella and patellar ligament (or tendon). It provides the power necessary to straighten the knee.

There are up to 13 bursa of various sizes in and around the knee. These fluid filled sacs cushion the joint and reduce friction between muscles, bones, tendons and ligaments. There are bursa located underneath the tendons and ligaments on both the lateral and medial sides of the knee. The prepatellar bursa is one of the larger bursae of the knee and is located on the front of the patella (hence pre-patellar) just under the skin. It protects the patella. Sometimes, whether due to direct trauma or even infection, it can become irritated, swollen, and painful.  This is known as prepatellar bursitis.

The pes bursa is another important bursa that overlies some of the hamstring tendons which attach to the medial side of the tibia.  It too can sometimes become irritated, causing pes bursitis, which can be painful.

Plicae are folds in the synovium within the knee joint itself. Plicae rarely cause problems but sometimes can get caught between the femur and patella and cause pain.

Problems in the Knee

As the knee has many structures associated with it, there are many problems that can occur around the knee.  In addition to wear and tear type issues of the knee, sports injuries are the source of many knee problems.

Knee symptoms can be quite variable. Pain can be dull, sharp, constant or an on-and-off type pain. As there are many structures of the knee that are prone to injury, depending on the underlying problem, the location of pain can be variable as well.

With certain types of injuries (ligamentous injuries), knee range of motion may actually increase as the knee becomes unstable.  On the other hand, with arthritis of the knee, range of motion can decrease.

If your symptoms are interfering with your quality of life, you should see an orthopedic surgeon to have your knee evaluated. He or she will perform a history (ask you questions about your symptoms and how they started) and a physical exam.  Imaging studies then may be ordered to help figure out what is causing your symptoms.  If you have had imaging studies performed elsewhere, it is always best to bring the actual CD of the study (i.e. not just the report) to your surgeon so that they can actually look at it in person. This will speed up the time it takes to figure out how to best treat your problem.

Pathological Conditions and Syndromes in the Knee

Note that the information in this article is purely informative and should never be used in place of the advice of professionals.