The brain, which is housed in and protected by the bones of the skull, makes up all parts of the central nervous system above the spinal cord. A human brain can weigh up to 3 pounds and is one of the largest organs of the body. Like the spinal cord, the brain is made of mainly gray matter and white matter arranged in distinct layers. The top of the brain appears as a soggy, pinkish-gray mass that looks like a walnut.

Parts of the Brain

The brain consists of the:

The brain can be divided into two major parts: the lower brain stem and the higher forebrain.

The brain stem sits above the spinal cord and has many connections between them. The brain stem, the most primitive part of the brain, is made up of the medulla, pons, cerebellum, midbrain, hypothalamus and thalamus. The cerebral cortex, limbic system and basal ganglia make up the forebrain. The forebrain deals with homeostasis, emotions and conscious actions.

The brain’s outer layer is only 1/4 inch thick but if flattened out would cover the size of an office desk. It has about 50 billion nerve cells. The cerebrum is the largest part of the brain and is part of the forebrain. It houses the nerve center that controls sensory, motor activities and intelligence. The outer layer, the cerebral cortex, is made of nerve fibers called gray matter. The inner layer is made of a different type of nerve fibers called white matter.

The basal ganglia is found in the white matter. The cerebrum is divided in to left and right hemispheres. The left half controls the right side of the body and the right half controls the left side of the body. A mass of nerve fibers known as the corpus callosum connects the two hemispheres and allows communication between the two. The surface of the cerebrum is made up of gyri and sulci.

The cerebellum, “little brain”, is the second largest region of the brain. It is located behind and below the cerebrum and at the back of the brain stem and attached to the midbrain. It has two hemispheres and an outer cortex of gray matter and an inner core of white matter. The cerebellum is involved in movement and coordination, walking, posture, reflexes, eye and head movement. It coordinates subconscious movements such as balance and coordinated movement. The cerebellum is constantly receiving updates about the body’s position and movement. It also sends instructions to our muscles that adjust our posture and keep our body moving smoothly.

The diencephalon is located between the cerebrum and midbrain. It consists of the thalamus and hypothalamus which lie deep in the cerebral hemispheres. Centers in the hypothalamus regulate our body temperature, blood sugar, hunger and hormones. The thalamus is involved with sensory signals sent to the higher forebrain, in particular the cerebral cortex. The thalamus also participates in motor control and regulating cortex excitement. Several pathways connect the brainstem to the lower motor centers in the spinal cord and the higher ones in the forebrain.

The brain is the control center of the body and contains billions of nerve cells. The brain stem lies just below the cerebrum and in front of the cerebellum. It continues from the cerebrum above and connects to the spinal cord below. The brain stem is made up of the midbrain, pons and medulla oblongata. It carries out many vital functions of the body for maintenance and survival such as breathing, heartbeat, and blood pressure. It also controls vomiting, coughing, sneezing and swallowing. It is the body’s “autopilot.” It also provides pathways for nerve fibers between the higher and lower neural centers. It is also the origin for 10 of the 12 cranial nerves. The 12 cranial nerves enter the brain directly and are not connected to the spinal cord.

The midbrain is the reflex center for cranial nerves III and IV and is involved in eye reflexes and movements. The pons helps regular breathing. It connects the cerebellum with the cerebrum and links the midbrain to the medulla oblongata. The pons is the reflex center for cranial nerves V through VIII. The pons is involved in chewing, taste, saliva, hearing and equilibrium. The medulla oblongata joins the spinal cord at the foramen magnum. It influences heart, breathing and circulation. It’s the center for vomiting, coughing and hiccuping.

The medulla—the most primitive brain structure—controls our digestive, respiratory and circulatory systems. The ponsinteracts with the cerebellum, motor control and respiration. Other structures in the pons control sleep and excitement. The pons also relays information between the brain and the spinal cord.

The limbic system, or limbic lobe, is involved in the expression of intimate behaviors and emotions, hunger, aggression. The limbic system also screens all sensory messages to the cerebral cortex. It is located deep in the temporal lobe. The limbic system includes these structures: cingulate gyrus, corpus callosum, mammillary body, olfactory tract, amygdala, and hippocampus. The hypothalamus affects body temperature, appetite, water balance, pituitary secretions, emotions, and autonomic functions including cycles of waking and sleeping.

Even though many functions of the brain are very localized to certain areas and parts of the brain, these parts work together as a whole—particularly in learning, memory, and consciousness.

Blood Vessels in the Brain

Cross Section Images of the Brain 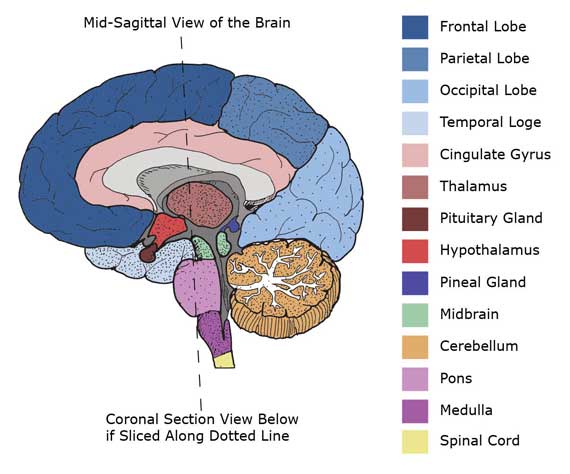 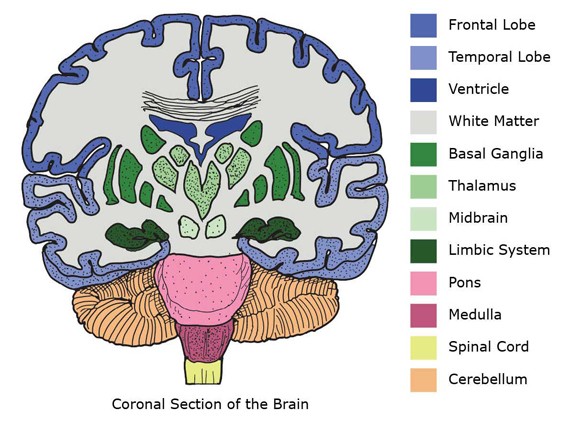 The forebrain consists of two almost symmetrical cerebral hemispheres made up of the cerebral cortex, the basal ganglia and the limbic system. The two hemispheres are divided by the longitudinal cerebral fissure and connected by a massive bundle of fibers called the corpus callosum. The surface of the two hemispheres is covered by a large, but thin layer of nerve cells called gray matter. Because of the area size of the gray matter, fitting it into the skull causes folds. The grooves in these folds are called sulci (singular sulcus), the ridges are called gyri (singular gyrus). The deeper grooves are called fissures. The cortex is a large mass of nerve fibers called white matter. These nerve fibers are highly developed and able to analyze both motor and sensory information.

The left and right hemispheres may look the same, but each side functions differently. Speech and language, reasoning and analysis, and certain communications are on the left side for most people. The left side of the brain sends and receives information to the right side of the body including the right hand. The right hemisphere is concerned with sensory input, auditory and visual awareness, creative abilities, and spatial-temporal awareness—that is what is happening around us moment by moment. The right brain controls the left side of the body.

Each of the cerebral hemispheres is divided into four lobes and are name for the cranial (skull) bones that lie over them:

Brain Injury: A guide for family and friends

• What is a Brain Injury?
• How Bad Is It?
• How the Brain Functions
• Common Problems During Early Recovery
• The Intensive Care Unit (ICU)
• Understanding Coma
• How Does an Injured Brain Heal?
• How You Can Help With Recovery
• Where Will the Journey Go From Here?
• How Will I Ever Get Through This?
• Where to Go for Help
• Books for Families Coping With Brain Injury

Dr. Matthew Bain, MD received his medical degree in neurology from the Indiana University School of Medicine. He is a practicing neurologist in Indianapolis, Indiana.