The endocrine system is one of two systems that control and coordinate many functions to keep our bodies working in balance, called homeostasis. While our nervous system uses electrical impulses, the endocrine system uses chemicals called hormones. Hormones usually work more slowly than nerves, but can have longer lasting effects.

The endocrine system is made of 9 major glands located throughout our body. Together, these glands make dozens of chemical messengers called hormones and release them directly into the blood stream that surrounds the glands. Using chemicals, our endocrine system regulates a number of functions including our metabolic rate, growth rate, and how our body develops. Lab tests are used to diagnose and manage health conditions caused by imbalances in hormones and chemicals.

The hypothalamus is located in the brain and links the nervous and endocrine systems to each other. It secrets hormones that put the pituitary gland into action.

The pineal gland is a small, pine-cone shaped endocrine gland in the brain. It produces melatonin, a derivative of serotonin, a hormone that affects wake/sleep patterns and seasonal functions.

The pituitary gland, or hypophysis, is an endocrine gland about the size of a pea. It weighs less than an ounce and is one of the most important organs in the body. It is located at the base of the brain and is closely connected to the hypothalamus. The pituitary gland secretes nine hormones that regulate homeostasis by stimulating other endocrine glands to produce and secrete their own hormones.

This particular gland has two components: the anterior (front) pituitary (or adenohypophysis) and the posterior (back) pituitary (neurohypophysis).  The anterior lobe makes up most of the gland and releases the majority of the hormones. The smaller posterior lobe stores hormones but does not make them. It links the endocrine system with the nervous system by way of the hypothalamus.

The thyroid gland controls how quickly the body uses energy (metabolism), calcium levels in the blood, how the body makes proteins, and how sensitive the body is to other hormones. It produces thyroid hormones, the principal ones being triiodothyronine (T3), thyroxine which can sometimes be called tetraiodothyronine (T4) and calcitonin. These hormones regulate the heart rate, the rate of metabolism and affect the growth and rate of function of many other systems in the body. T3 and T4 are made from iodine and tyrosine. Calcitonin slows down the rate at which bone is broken down decreasing the amount of calcium dissolved in the blood.

The small, triangular adrenal glands (also known as suprarenal glands) sit atop the kidneys. Each is divided into two distinct anatomic and functional organs. The adrenal cortex (the outer region which secretes corticosteroid hormones that affect metabolism (that is how food is stored and used), chemicals in the blood, and characteristics such as body shape and hairiness. The smaller, inner region—the adrenal medulla (which is part of the sympathetic nervous system)—is the body’s first line of defense against physical and emotional stress.

They are mainly responsible for releasing hormones in response to stress through the synthesis of corticosteroids such as cortisol and catecholamines such as epinephrine (adrenaline) and norepinephrine. They also produce androgens. The adrenal glands affect kidney function through the secretion of aldosterone, a hormone that helps regulate the osmolarity of blood plasma. The adrenal glands help us deal with dress and as well as maintain homeostasis.

Disorders of the adrenal glands include congenital defects such as adrenal hyperplasia, tumors, autoimmune disorders, infection, and impaired blood supply.

When looked at under a microscope, the adrenal cortex is made up of 3 distinct zones. The outermost zone secretes the hormone aldosterone, which inhibits the amount of sodium excreted in the urine, maintaining blood pressure and blood volume. The inner and middle zones together secrete hormones hydrocortisone, also called cortisol, corticosterone, as well as small amounts of androgen hormones. The rate of release and amount of secretion is controlled by other hormones made in the hypothalamus and pituitary.

The adrenal medulla is closely related to nervous tissue and secretes the hormone epinephrine and norepinephrine in response to stimulation by sympathetic nerves. These nerves are most active at times of stress. The release of these hormones increases the heart rate in order to pump more blood to the large skeletal muscles. The airways in the lungs are increased so that more oxygen can be taken in. As more blood is sent to the active organs less blood is sent to the internal organs.

The pancreas is a gland organ in the digestive system and endocrine system. It is both an endocrine gland—producing several important hormones, including insulin, glucagon, somatostatin, and pancreatic polypeptide—and a digestive organ—secreting pancreatic juice containing digestive enzymes that help with the absorption of nutrients and digestion in the small intestine. These enzymes help to break down the carbohydrates, proteins, and fats.

The ovary is an ovum-producing reproductive organ, often found in pairs in the female reproductive system. Ovaries in women are analogous to testes in males—they are both gonads and endocrine glands. Our ovaries produce estrogen, progesterone, relaxin and inhibin.

The testicle is the male gonad. Like the ovaries in women to which they are homologous, testes are components of both the reproductive system and the endocrine system. The primary functions of the testes are to produce inhibin, sperm (spermatogenesis) and androgens, primarily testosterone. 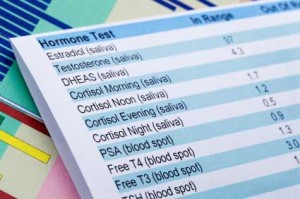 Hormones are powerful chemical messengers that our endocrine system uses to control various processes in our body. Hormones can be fat-soluble or water-soluble. Endocrine glands secrete hormones into the blood stream near them; the hormones then travel in our bloodstream until it reaches its destination, called a target cell, in distance parts of the body. In the target tissue, hormones lock onto the target’s plasma membrane, called the receptor site. This chemical changes inside the target cells and adjusts the rate at which a specific action happens, such as a contraction of the muscle. Hormones can have one target or several targets. Hormones are released when they get feedback from triggers. Some hormones work on specific cells while other hormones work throughout the body. The level of hormones in the body are controlled by feedback. It is important that the amount of hormones in our body is kept at the right level. If hormone levels get too high or too low, they can make us sick. Although hormones come in contact with many cells in the body, they only react with target cells. A hormone can have more than one target cell, and can have different effects on different targets.

This is a pituitary hormone that helps regulate the function of the reproductive organs. It stimulates ovulation to release the egg in the woman’s ovaries. In men it triggers the testes to produce male reproductive hormones.

Oxytocin is a pituitary hormone that stimulates muscle contractions in the uterus during childbirth. These contractions cause the release of more oxytocin. This is a positive feedback reaction that makes the cycle continue until the baby is born. Oxytocin also stimulates the breasts to release milk when the baby feeds.

The hormone glucagon increases the level of sugar in the blood. It plays a vital part in maintaining the correct blood sugar level. It is made by the pancreas, a gland that is part of the endocrine system and the digestive system. The pancreas releases glucagon when the blood sugar level starts to fall. Glucogon makes cells release glucose, and helps convert glycogen, the form of glucose stored in the liver, back to glucose. As a result the blood sugar level rises. Your blood has enough glucose to keep you alive for just 15 min. However, as glucose is used up, more is released to take its place.

Estrogen is the female hormone made mainly in the ovaries. It not only makes the girl reproductive organs develop, and controls her monthly menstrual cycle. Progesterone is the female hormone that prepares the girls uterus for pregnancy every month. Some contraceptive pills have estrogen in them to prevent the ovaries from releasing their egg cells.

Epinephrine is a hormone that works with out nervous system to prepare our body to cope with danger or stress. If you’re suddenly scared, your heart pounds, your breathing becomes steep and rapid. These are just two of the effects of epinephrine, also called adrenaline. Epinephrine is a very fast acting hormone that prepares our body for emergency action—also called the fight or flight reflex. It speeds up our breathing and heart rate and diverts extra blood to the muscles. At the same time it slows down digestion and makes the liver release glucose into the bloodstream so more fuel is available for the muscles to contract.

Insulin is a hormone that reduces the level of sugar in our blood. Insulin is a protein made by the pancreas. It is released when the blood sugar level rises and reduces the sugar in 2 ways. First it makes insulin take up the glucose. 2nd in makes the liver store glucose by turning it into glycogen. Insulin and glucagon have opposite effects. Together they form a negative feedback system that keep sugar levels within set limits. In people with diabetes this control system does not work properly and they made may need daily injections of insulin to keep their blood glucose levels within safe limits.

The growth hormone is a pituitary hormone that controls the body’s growth by stimulating cell division. It also increases the blood glucose level. If your body has too little growth hormone, the body fails to grow normally. Too much growth hormone can cause the body to grow more than usual.

This hormone stimulates the adrenal glands to produce other hormones.

This pituitary hormone increases the amount of water in the blood. A diuretic is a substance that stimulates the body to produce urine by taking water out of the blood stream. The antidiuretic hormone or vasopressin, have the opposite effect. It increases the amount of water that the kidneys return to the blood and makes arterioles constrict. As a result, more fluid is squeezed into a smaller space and blood pressure rises.

This hormone and the Luteininzing Hormone are used in reproduction in both men and women. They also affect the production of reproductive hormones.

The growth hormone encourages growth in children and teenagers, makes our bones stronger, and helps build muscle. Growth is controlled by hormones produced by the pituitary gland.

Oxytocin encourages childbirth and makes the breasts release milk when breast-feeding a baby.

Prolactin is produced during and after pregnancy and helps the breasts produce milk for breast-feeding.

Disorders of the Endocrine System