Human anatomy is the study of the structure of the human body. Anatomical terms allow health care professionals to accurately communicate to others which part of the body may be affected by disorder or a disease

Terms are defined in reference to a theoretical person who is standing in what is called anatomical position (see figure below): both feet pointing forwards, arms down to the side with palms forward (thumbs pointed away from the body). The positions of the arms and legs have important implications for directional terms.

Ultimately communicating using anatomical terms makes it easy to communicate description of body areas regardless of the individual’s position. For example, suppose a doctor was trying to describe an area of the body to another physician on a patient who is lying face down? Descriptions would be based on anatomical position to make things simpler and to avoid any confusion.

For the most part, directional terms are grouped in pairs of opposites based on the standard anatomical position. 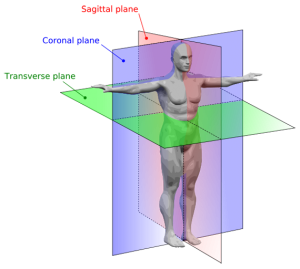 A plane is a theoretical line that divides the body. These planes are often used to describe location of structures or to describe directionality of movement. Oftentimes, these terms are used within the context of advanced medical imaging studies such as computed tomography (CT) and magnetic resonance imaging (MRI) scans.

You can see that the three basic planes (sagittal, coronal, transverse) intersect one another at right angles. For “normal” human bodies, the right and left sides are mirror images if divided right down the center by the sagittal plane as shown in the image below. 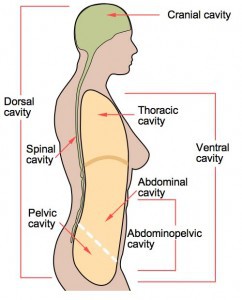 The dorsal cavity is further divided into the following subcavities:

The Thoracic and Abdominopelvic Cavities

Quadrants are another way our bodies are divided into regions for both diagnostic and descriptive purposes.

Quadrants divide our bodies into regions for diagnostic and descriptive purposes. The quadrants are defined by drawing an imaginary line vertically (top to bottom) and horizontally (sideways) though the umbilicus (belly button). The following is a list of the organs in the four quadrants. 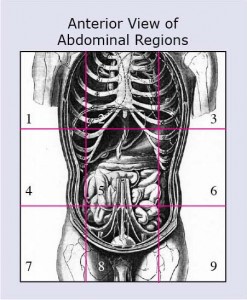 Body regions are further subdivisions of the body quadrants. They are named based off of the special function that the organs within that region perform or based on the blood or nerve supply to that region. The most widely used regional terms used are those that describe the 9 abdominal regions shown in the image to the right. The regions are named below and the corresponding regions are labeled 1-9.

Body areas is just another way to describe regions of the body. Below are examples of some relevant terms: 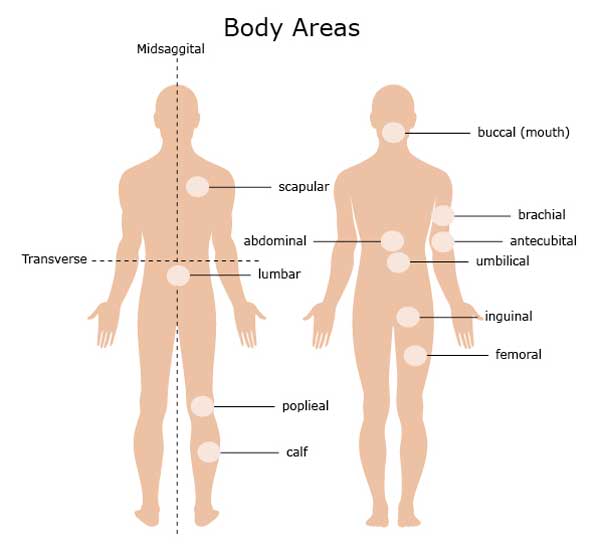