Bones and Joints of the Foot and Ankle

The ankle joint or tibiotalar joint is formed where the top of the talus (the uppermost bone in the foot) and the tibia (shin bone) and fibula meet. The ankle joint is both a synovial joint and a hinge joint.  Hinge joints typically allow for only one direction of motion much like a door-hinge.  Consequently, the ankle joint mainly only allows for upward (toes-up; or dorsiflexion) and downward (toes down; or plantarflexion) movements of the foot in relation to the tibia.

The ankle joint is actually more stable in dorsiflexion (toes up) than in plantarflexion (toes down). Other movements, such as tilting (eversion and inversion) and rotation take place in and around the joints in the foot itself (see subtalar joint below).

As is the case with all joints, an articular capsule surrounds the tibiotalar joint as well. A synovial membrane lines this capsule and is responsible for producing synovial fluid.  Synovial fluid is a lubricant which helps to promote very smooth and pain-free motion at the ankle joint.

The arteries supplying the ankle joint are branches of the anterior and posterior tibial arteries as well as the peroneal artery.

The nerves of the ankle are derived from the deep and superficial peroneal nerves, the tibial nerves, and the sural and saphenous nerves.

The foot is a firm platform that support the weight of the body.  It is made up of many bones including the tarsal bones, the metatarsal bones, and the phalanges (described in more detail below). Many of the bones, particularly of the midfoot, are solidly reinforced with very sturdy ligaments which limit motion.  Consequently, when compared to the hand, despite having similarities in structure, the foot is much less mobile. For instance, while similar bones do exist between the hand and the foot, such as the metatarsal bones and the phalanges (analogous to the metacarpal bones and phalanges of the hand) the bones of the feet are smaller, more sturdy in nature, and have limited motion when compared to the bones of the hand. This is again a consequence of design for function — the purpose of the foot is much different than that of the hand. i.e. versus the hand which is designed for grasping objects, etc. the foot is designed to serve as more of a platform to walk on.

Below are slightly more detailed descriptions of the bones of the foot.

The tarsal bones work together as a group. The way these bones fit together and interact with one another is very interesting. When the muscles of the foot and leg twist the foot in a particular direction, the tarsal bones lock together to form a rigid post. This occurs during the phase of walking called toe-off, which allows you to propel yourself forward without your foot collapsing beneath you.

On the other hand, when muscles pull in the opposite direction, the bones unlock, allowing the foot to conform to whatever surface the foot is in contact with. This starts to happen around the phase of walking called heel-strike.

There are seven tarsal bones: the calcaneus, talus, cuboid, navicular, and the first, second, and third cuneiforms.

The calcaneus (heel bone) is the largest of the tarsal bones. It transmits the weight of the body to the ground and serves as the attachment point for the muscles of the calf. The calcaneus joins with the talus and cuboid.

The cuboid is on the lateral side of the foot (outer foot) and sits in front of the calcaneus.

There are 5 metatarsal bones that are numbered 1-5 starting from the inner (medial) aspect of the foot. i.e. the metatarsal associated with the great toe is the 1st metatarsal.

There is a fairly rigid connection between the metatarsals and tarsal bones (this section of the foot is known as the midfoot).  Consequently, not much movement occurs here. This is important to keep in mind in the setting of midfoot arthritis. i.e. if an individual is experiencing significant pain from midfoot arthritis, not much foot motion is lost following a mid-foot fusion (the surgical procedure of choice for this condition).

The phalanges are the small bones of the toes. Each joint that is formed between the metatarsals and the first phalanx of each toe is called a metatarsophalangeal joint. These joints form the “ball” of the foot, and normal movement in these joints is very important for a normal walking pattern. The most important of these for walking is the 1st metatarsophalangeal joint (the great toe). Furthermore, many common problems of the foot involve this joint. Osteoarthritis can develop here which can be quite debilitating (this is called hallux rigidus).  Gouty flares tend to involve this joint as well. Finally, a bunion (also called hallux valgus) can also develop here.

As described earlier, the phalanges of the foot are analogous to the phalanges in the hand in terms of number and general arrangement: there are two phalanges in the great toe (i.e. similar to the thumb), and three in each of the other toes. They differ from the hand, however, in their size and shape. The bodies are shorter in length and tend to be much wider in diameter as well.

Soft Tissues of the Foot and Ankle

The soft tissues of the foot and ankle include ligaments, tendons, and fascia. Some of these structures were briefly discussed before.

Ligaments are strong, dense, and flexible bands of fibrous connective tissue. The function of ligaments is to attach bones to bones and help to stabilize them to one another. Ligaments are often named after the bones they join together. The name may also contain a postional description. For example, the posterior talotibial ligament is on the posterior side (back side) of the foot and connects the talus to the tibia.

There are many muscles that help to move and support the ankle and foot. The strong muscles that move the ankle originate in the leg. The most well-known are the gastrocnemius and soleus muscles, which are the strong calf muscles that allow you to push up on your toes. The other muscles of the calf that are deeper within the leg are the flexors of the toes (i.e. they curl the toes – these include flexor hallucis longus and flexor digitorum longus which curl the toes) as well as the larger posterior tibialis muscle which is a strong inverter (swings the ankle inwards) of the ankle. This muscle is also important to the maintenance of the normal arch of the foot. It also is the muscle that is responsible for “locking” the tarsal bones of the foot during toe-off (as described above) so you can appropriately propel yourself forward when you walk. Consequently, many people who develop a diseased posterior tibialis tendon (also known as posterior tibial tendon insufficiency) are unable to toe-off and also become flat-footed, particularly as the condition becomes more severe.

On the outer leg are the peroneal muscles. These include both the  peroneus longus and the peroneus brevis muscles.  These two muscles allow you to evert the ankle i.e. swing it outwards. The tendons of these muscles wrap underneath the lateral malleolus (i.e. the tip of the fibula) and can actually become irritated or torn here, leading to symptoms of pain.

On the front of the leg you have the extensors of the toes (such as extensor hallucis longus, extensor digitorum longus) and the anterior tibialis muscle – the strongest dorsiflexor of the ankle (allows you to point your toes towards the ceiling). i.e. weakness of this muscle or tearing of its tendon leads to a foot-drop. The peroneus tertius muscle also is located on the front of the leg.

There are many muscles within the feet itself. However, a more detailed description of these muscles is beyond the scope of this article.

Tendons are elastic tissues made up of collagen. They are the rope-like ends of the muscles that allow them to firmly connect to bones. The numerous tendons around the ankle help to stabilize and ultimately move the ankle. They are associated with the muscles discussed in the section above.  One of the most important tendons is the achilles tendon. This is the tendon on the back of the ankle that represents the attachment of the calf muscles (the gastrocnemius and soleus muscles) to the calcaneus. This tendon can become torn or irritated, causing weakness and/or pain. 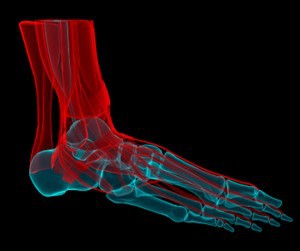 Fascia is a broad fibrous sheet-like structure that is found all over the body.  In most situations, it helps to separate soft tissue layers from one another. In certain areas of the body, different fascias may additionally act as stabilizers.  For instance, the plantar fascia is an important structure on the bottom of the foot that is important for both the normal function of the foot and for maintaining the normal arch of the foot.  It is also a common cause of heel pain (also known as plantar fasciitis).

Common Problems in the Ankle Joint and Foot