Combination of relief, fear, shock
If labor has been long or difficult, if there has been anxiety for the mother or baby – a sense of not knowing what to expect, or having lost control.

Disappointment
Especially common when parents have expected and prepared for a more active participation in the birth.

Loneliness
Being separated at a time when support, closeness, and the need to be together occurs.

Failure
Feelings of inadequacy because delivery was not accomplished vaginally. Support person may feel that she/he let the mother down by not being present for the birth.

Anger
“Why” and “why me”, anger at the doctor, certified nurse midwife, baby’s father, and/or the family.

Resentment
Towards the baby for being the cause of the mother’s pain, discomfort, and trouble. Cesarean mothers often have less energy at first and may resent the demands and responsibilities of child care.

Self blame and depression (turning anger inward)
“If only I hadn’t gained so much weight, if only I didn’t do this, or had done that.”

Self esteem
Sometimes suffers because they couldn’t do it “right” and feel that they are failures as women.

Body Image
May suffer. Not only have their bodies not worked “right”, but the scar is an ever present reminder. Some women may feel rejection from their mate due to the scar.

Depression
A period of the “blues” may be common after any method of childbirth. Cesarean parents may feel that the birth was a “let down”.

Mixed feelings of future births
Many dread the anxiety and pain of another cesarean. Others may see it as a relief from the labor.

Once again, that is sometimes true, when the risks associated with a cesarean are outweighed by the benefits of having a baby born surgically. Sometimes, a cesarean is performed before labor begins. However, even with advanced techniques (ultrasound or amniocentesis), there is a greater risk of respiratory problems, even in term infants, than when the start of labor determines the baby’s birthday. Truly premature infants are subject to breathing and other physical difficulties of low birth weight, whether they are born surgically or vaginally. In addition, cesarean babies can also have anesthesia complications and may be sluggish and slow to start breathing. Such a start can impair relationships
with the new baby, including a more difficult beginning to breastfeeding.

“I never knew such a simple procedure could have such effects.”

Oh, but the point is, as cesareans have become more commonplace, we’ve accepted them as simple procedures. Although cesarean sections are safer than ever and, when necessary, a true blessing, a cesarean is clearly not a simple procedure. Also we haven’t even covered other side effects that are harder to measure.

“What do these emotions mean?”

Well, there is no doubt that the immediate relationship between the cesarean mother and her baby is different from the relationship after a natural or vaginal birth. The mother may be groggy and unable to hold her baby, and baby is often moved out of sight and touch for an examination during the important introductory moments following birth. Infant and parents may be separated for a time while the baby is observed in a central nursery. After a cesarean, mothers often describe a wide range of feelings that include failure, anger, disfigurement, inadequacy and resentment, while at the same time feeling glad that their babies are born.

Such opposite feelings can sometimes lead to an uneasy and confusing start for parenting. It’s harder to care for a baby when you need so much care yourself. Fathers and other companions may feel frustrated at having to give so much more physical and emotional support. After all, besides learning to care for her newborn and/or taking care of other children, a cesarean mother is recovering from surgery. The time following a baby’s birth is tiring. As sleep, housekeeping and general life patterns change to meet the needs of the new family, the additional needs of the cesarean mother may increase the typical difficulties of adjusting to the new baby.

Develop a confidence and belief that birth is a safe and natural process that generally succeeds without intervention. Recognize that when a cesarean section is necessary, it can be truly life-saving, but that giving birth naturally is the way it is meant to be. 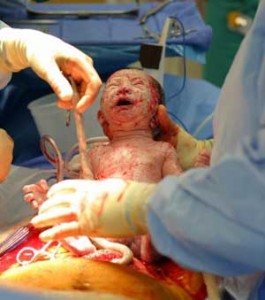