A cesarean birth (cesarean or c-section) is major surgery where a baby is delivered by an incision that is first made on the skin, then the underlying abdominal muscle wall and finally the uterus itself. Cesareans can be done by an obstetrician as planned surgery or as an emergency procedure when vaginal birth isn’t possible. The American College of Obstetricians and Gynecologists recommends that non-emergency cesareans be performed no sooner than 39 full weeks of gestation. Although cesarean births are considered very safe, there are risks, including death. The reasons for and the outcome of any surgical procedure depend on age, how severe the problem is, and your overall general health.

There are three types of incisions made in the uterine wall for the delivery of the baby. The type of incision chosen depends on the presentation of the baby and the speed at which the procedure can be done. 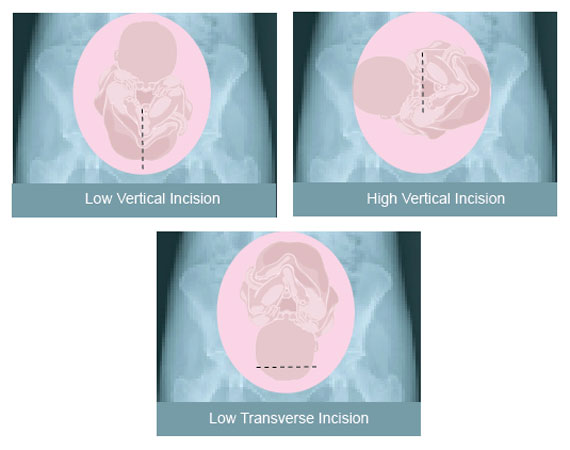 Cesareans can be done with either an up-and-down or side-to-side incision in the skin of the abdomen. Therefore, it’s not possible to know whether the uterine wall had a transverse or up-and-down incision based solely on the scar on the abdomen.

Apart from the major difference in the pattern of incision as mentioned above, there are other advantages between a low transverse, low vertical and classical cesareans:

The major disadvantage to this incision is that it takes longer to do so in case of an emergency, this incision isn’t used. Today, the low transverse cesarean is preferred and performed by most OB/GYNs. The way your uterus is cut may not seem important, but it can play an important part in the decision on later births whether you can try a vaginal birth after cesarean (VBAC).

At one time, most babies were born by vaginal birth, which in some cases caused complications both for the mother and the newborn, which led to a high mortality rate. Cesarean births were only performed in emergency situations and most of those were the classical cesarean that had more complications. As surgical techniques and anesthesia have developed, cesarean birth has become a more common method of birth and the chances are much higher of delivering a healthy baby and reducing risks for mother.

Cesarean births are most often performed for two main reasons:

The following reasons fall under these two main reasons:

Many of these complications happen in a very small number of births. And the decision for cesarean birth is decided by balancing the risks and benefits to mother and baby.

Risks to Mothers During Cesarean

Any kind of surgery involves risks, and a cesarean will, too. Risks are usually measured by the rate of deaths, complications, and disorders during or after the surgery.

Maternal deaths during cesarean birth are very rare—about 2 in 10,000. However, research shows that the death after cesarean birth is twice that of vaginal birth. This is mostly not related to the surgery, but rather illnesses or complications taking into account cesarean births are usually done for complicated pregnancies.

Like any major surgery, cesarean births have risks and possible complications:

• Endometritis. The most common complication is endometritis—the inflammation or infection of the lining of the uterus.

• Reduced bowel function. Sometimes the medicines used for pain relief or anesthesia can slow down bowel functions causing gas, bloating and abdominal discomfort for a few days after surgery.

• Reaction to anesthesia. Sometimes breathing problems are associated with general anesthesia. General anesthesia is used in less than 20% of cesarean births. Also, follow your health care teams advice about ways to prevent pneumonia.

• Blood loss is higher in cesarean birth than vaginal birth, although transfusions are rarely needed.

• Accidental injury to bladder or bowel from surgery. These are rare, but can happen.

• Placenta accreta is when the placenta is too firmly or deeply attached to the uterus and can lead to hysterectomy.

Risk to Baby During Cesarean

• Fetal injury can occur if the baby is accidentally cut or nicked during cesarean birth.
• Low Apgar scores can result from anesthesia.

All surgery requires anesthesia since it numbs the pain. In cesarean birth, anesthesia is very important since the fetus can by affected by the anesthesia.

There is very little difference between spinal and epidural anesthesia. Both are administered locally—to a specific area—that numbs part of the body without putting you to sleep. Spinal anesthesia was prevalent before the popularity of lumbar epidural anesthesia that is now used for most cesareans.

The mother usually decides on the type of anesthesia after talking with her OB/GYN and anesthesiologist. Most doctors recommend local anesthesia—spinal or lumbar epidural—for an uncomplicated cesarean birth.

The nurses will get you ready for surgery by placing an IV in your hand or arm to give you fluids and medicines. You may also have blood drawn for blood tests. You’ll have monitors attached for watching your blood pressure, heart beat, and how much oxygen you’re getting during surgery. You’ll also have a urinary catheter inserted to drain urine from your bladder so your bladder is not in the way. Once you get to the operating room, you may have added oxygen through a mask. If you haven’t already had the epidural or spinal block, that will be done, too. If you are having an emergency cesarean you will likely have general anesthesia. If you have general anesthesia, all preparations will be done before you are given anesthesia to keep your baby from getting too much anesthetic, making it harder for him to wake up at birth. Your arms will likely be secured onto padded boards. Your abdomen will be scrubbed and drape put up below your chin to help keep the surgical area sterile. If you’re awake, you won’t be able to see what is happening. Your doctor, the anesthesiologist or a nurse will let you what is happening and answer your questions.

Once everything is ready, about a 6 inch  incision will be made in the skin of your abdomen. Whether the incision is up-and-down (vertical) or side-to-side (transverse), will depend on several things—if you had a previous cesarean birth, if this cesarean is an emergency, the position of your baby or the placenta, and the size of your baby. A bikini incision is used most often for cosmetic reasons as well as it heals well and presents fewer problems in later births. If your baby needs to be born quickly, an incision just below your belly button to just above your public bone is made. This allows your doctor to get to your baby more quickly.

Once inside your abdomen, your bladder is moved to one side and a smaller incision is made in the uterus. Again, the incision in the uterus can be transverse or vertical—the type of incision made on your skin does not affect the type of incision made in the uterus. The low transverse it the most common and used in about 90% of cesareans—see illustration above. The low transverse causes fewer problems in later pregnancies because it makes a stronger scar reducing the chances of uterine rupture. In fact, you may be able to try a vaginal birth in later pregnancies. 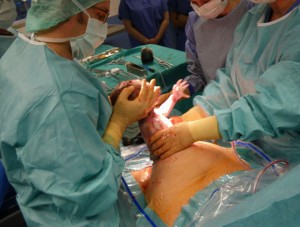 Your doctor presses on the top of your uterus and pulls your baby out through the incision. You won’t feel any pain but may feel some pressure or pulling because the incision is kept as small as possible. Once your baby is out, the umbilical cord will be cut—if your partner is there, they may allowed to cut the cord. Your baby will be given to the nurses to clean the airways and body. The placenta will be removed, the uterus closed with absorbable stitches, you will be closed up layer by layer. The incision on your abdomen will be closed with staples or clips. The doctor will press on your uterus to force blood and blood clots out through the vagina. You’ll be given medicine to shrink  your uterus and reduce bleeding. You may also be given antibiotics to help prevent infection.

If your baby is OK you may be able to hold her and even nurse her, depending on the rules at your hospital. If your baby is not OK, then she will be taken to the nursery quickly for special care. The nurses with you will talk with the nursery and let you know how your baby is doing.

Learn more about Self Care After Cesarean Birth.

Psychological Effects of Having a Cesarean Birth

Some hospitals offer Family Centered Cesarean Births and allow the father to be present in the operating room during the cesarean birth. They also offer closer contact between the mother and her newborn after surgery and you may be able to hold your baby right after birth. If you’re having a planned cesarean, talk with your hospital about having the options they offer such as allowing your partner to cut the cord and carrying the baby to the warmer, breastfeeding in the recovery room, and allowing you to touch or hold your baby in the operating room. All of these can help you begin bonding with your newborn. If you are have an emergency cesarean, your family won’t be able to be with you.

• Anesthesia: Relief of pain by loss of sensation.
• Breech Presentation: A situation in which a fetus would be born buttocks or feet first.
• Cervix: The lower, narrow end of the uterus, which protrudes into the vagina.
• Fetal Monitoring: A procedure in which instruments are used to check the heartbeat of the fetus and contractions of the mother’s uterus during labor.
• Placenta: Organ that provides nourishment to and takes away waste from the fetus.
• Umbilical Cord: A cord-like structure containing blood vessels that connects the fetus to the placenta.
• Uterus: A muscular organ in the female pelvis that contains and nourishes the developing fetus during pregnancy.