An appendectomy is the surgical removal of the vermiform appendix and is the only effective treatment for acute appendicitis. Acute means it starts suddenly. Appendicitis usually develops without warning over a period of 6-12 hours. An appendectomy is usually performed to prevent rupture of an inflamed appendix, and is often done as emergency surgery. Emergency surgeries are urgent and life saving. If the appendix bursts, there is an overwhelming risk of infection and complications. If there is no evidence of rupture, most appendectomies are done laparoscopically. Before going further, let’s first understand the vermiform appendix and appendicitis. 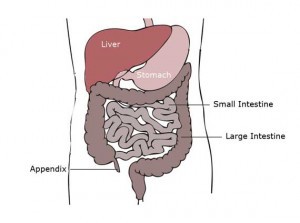 The appendix, located in the right lower quadrant, is a 3-6 inch long, worm shaped process projecting from the end of the cecum and lined with a mucus membrane. The appendix is of no potential use to the functioning of the human body. The appendix is closed at one end and the other end is attached to the large intestine. The function of the large intestine is to move the waste from the body through the anus and absorb water. The appendix can get blocked with stool or bacteria causing it to produce mucus, which eventually thickens and blocks the appendix. When the appendix gets blocked, it gets swollen, inflamed and filled with pus. This condition is called appendicitis.

It is unclear whether appendicitis is hereditary but having a family history of the condition is an indicator that it might be.

The first symptoms of appendicitis are on and off pain in right side of the abdomen, which gradually increases to a sharp and persistent pain in and around the bellybutton. The pain may move towards the right lower quadrant of the abdomen and gets worse with moving, taking a deep breath, coughing, sneezing, walking or being touched. Other symptoms include:
• fever (follows other symptoms) of 100°F to 101°F
• nausea, vomiting, loss of appetite
• frequent and/or painful urination
• diarrhea
• constipation, and can’t pass gas
• abdominal swelling in the later stages

Blood tests will show an elevated white blood count. Sometimes appendicitis can be hard to diagnose because many other illnesses cause sudden abdominal pain and similar symptoms. Early diagnosis is important to prevent rupture (when your appendix bursts) and complications.

If untreated, appendicitis can be fatal. When the infected appendix bursts, the contents of the lower gastrointestinal tract enters the abdominal cavity, and infects the entire peritoneal cavity. When this happens, the patient gets a high fever and the pain may suddenly stop.

Appendicitis is more common in men, occurs between the ages of 10 and 20, and rarely occurs after age 50. Acute appendicitis is an emergency and the appendix should be removed right away. There is no specific prevention for appendicitis.

Complications of appendicitis include blocking of the intestine. When the appendix gets inflamed it can block the intestine and interferes with the function of the intestinal wall. This prevents passing of liquids and gas causing nausea and vomiting.

An infected appendix can rupture or burst within 24 hours after symptoms begin. This may cause abscesses, that is, pus-filled boils around the appendix; or diffuse peritonitis, that is, infection of the abdominal cavity which is a potentially life-threatening. Symptoms of peritonitis include mild to moderate abdominal pain, fever, change in bowel habits and feeling as if you don’t have enough energy to do your daily activities.

White Blood Count (WBC): The white blood cell count is usually elevated when an infection is present. An elevated WBC count helps confirm appendicitis. However, a WBC alone cannot determine appendicitis since a WBC increases in any kind of infection.

Urinalysis: This is the microscopic examination of the urine to determine the presence of red blood cells, white blood cells, or bacteria. An abnormal urinalysis means inflammation or kidney stones. The inflammation could be from the appendix since it is situated very close to the ureter and bladder.

Xray: Xray of the abdominal area can show an intestinal blockage. Stool may become hard and block the opening of the appendix which can be seen on xray.

Ultrasound: Ultrasound is a procedure that uses sound waves to examine various organs in the body. Ultrasound helps determine an enlarged appendix or abscess. Ultrasound also helps eliminate other health conditions that have symptoms similar to appendicitis, mostly in women, like complications of the ovaries or fallopian tubes.

CT Scan: A computerized tomography (CT) scan is very useful in case of pregnancy to identify appendicitis or other abscesses attached to the appendix and/or eliminate other diseases causing similar symptoms.

Appendicitis is treated surgically with an appendectomy.

Preparing for an Appendectomy

The anesthesiologist will want to know how long it’s been since you had something to eat or drink. General anesthesia can only be done on an empty stomach because of the risks of throwing up while sedated.

Appendectomy or removal of the appendix can be done in two ways—the traditional open surgery or the newer technique called laparoscopic surgery. The procedure takes about an hour.

In an open appendectomy, a two- to three-inch incision is made in the skin of the abdomen and underlying layer of fat. The muscles and organs are separated and the peritoneum is cut to reveal the cecum (part of the colon). The appendix and other abscesses, if any, are identified and cut away from the colon. Any fluid or pus from the infected appendix is suctioned away. Sometimes a drain is left in place for a few days. The colon is sutured and blood vessels are tied off; the abdominal cavity is closed, followed by suturing or stapling the incision made on the skin of the abdomen. Stitches or staples are usually removed 7-10 days after surgery.

In a laparoscopic appendectomy, there are no large skin incisions, only a few small puncture wounds. The laparoscope, which is a thin tube with a video camera attached at one end, is inserted through one of these puncture wounds. The doctor is able to see inside the abdomen on a TV monitor that is attached to the video camera. The camera allows the surgeon to verify the diagnosis before removing the appendix. The appendix is removed with instruments inserted through one of the other puncture wounds on the abdomen. Laparoscopy is better for the patient than open surgery because there is less postoperative pain and less chance of complications. If you have a laparoscopy, you will most likely go home on the day of your surgery.

After surgery you will go to the recovery for room about an hour. If you had an open appendectomy you will be up and walking around within 6 hours. If there are no complications you will go home in a day or two.

Complications of an Appendectomy

As with all surgery, an appendectomy has possible complications. Complications may be due to anesthesia, breathing problems, bowel obstruction, side effects to medicines or the surgery.

The possible complications from surgery are excessive bleeding or infection of the incision site. Infection can range from mild to moderate to severe. In mild infections, there is mild tenderness and redness in the area. Moderate infections can be treated with antibiotics; severe infections may need surgical procedures in addition to antibiotics. Infections are rare with laparoscopic procedures.

An appendectomy that was performed for a ruptured appendix can have other complications requiring a longer hospital stay.

In very rare cases, appendectomy can have long-term effects such as increasing the risks for other diseases like Crohn’s disease.

Recovering From an Appendectomy

After an uncomplicated appendectomy, you will be released from the hospital within three days and can resume normal activities in about 2-3 weeks. Returning to normal activities can be a little longer if the appendectomy was done for a ruptured appendix or there were complications. Care during the healing process includes:

Start with a liquid diet if you have nausea and to allow your intestines to return to normal function. You can slowly resume your regular diet. It’s important to eat a balanced diet to speed up the healing process. You may need a stool softener to prevent constipation from pain medicine and the anesthesia.

If you had open surgery, you will have a short scar; if your surgery was done laparoscopically, you will have 3-4 scars about a half inch long where the instruments were inserted into the abdomen.

In most cases, you’ll be allowed to resume regular activities within two to three weeks after surgery. Your surgeon may give you certain restrictions to follow to avoid complications. Restrictions can include avoiding heavy lifting, not going to the gym, playing sports, running or jogging, or doing any heavy physical activities for 6 weeks. Avoid driving for 2 weeks.