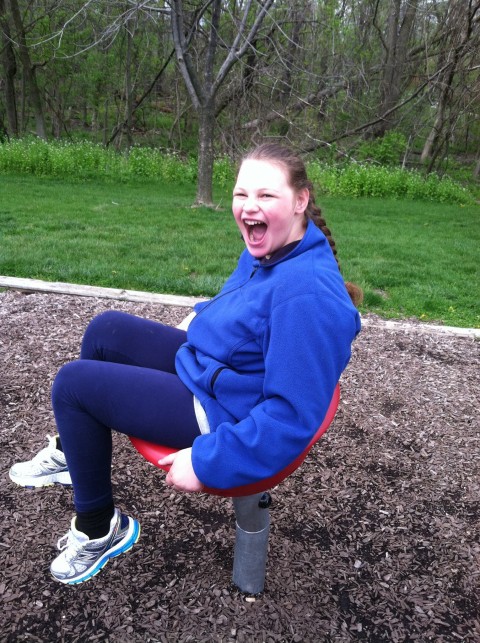 Our youngest daughter has Angelman Syndrome. She is 15, can’t speak, still in diapers and is the joy of our home.

Angelman Syndrome is a neurological, genetic disorder caused by a missing or defective gene on the 15th chromozone (UBE3A). We receive two pairs of genes from our parents, a maternal gene from our mother and a paternal gene from our father. In most places in the body both genes are activated. In this area of the genome, only the maternal copy is active. Angelman Syndrome occurs most often when the gene on the mother’s copy is missing. It is a rare condition affecting between 1 in 12,000 and 1 and 20,000 people.

The result is a severe impact to cognitive function, severely impeded speech, balance and motor skills issues and a high incidence of seizures. And people who are very happy, socially aware and give a lot of love.

This is our Anna.

When Anna was 12 months old we noticed developmental delays that our previous 3 children had not experienced. She wasn’t crawling, had a lot of reflux and couldn’t / wouldn’t drink out of a bottle. We were alarmed that she didn’t drink but the doctor told us she was getting enough fluids from baby food.

Most Angelman Syndrome children are misdiagnosed because the condition is quite rare. We were lucky that the first neurologist we visited had Angleman patients of his own and ordered a test that came back positive for the syndrome in just a couple of weeks. We didn’t have a long and worrisome wait to learn what the problem was.

We did have to come to grips with the fact that our daughter wouldn’t be “normal”. But hey, who’s normal?
The state of Indiana where we lived offered a therapy program called First Steps to children through the age of 36 months. We took advantage of speech, occupational and physical therapy visits for the next two years. Anna responded well and learned to walk and feed herself.

Anna is blessed not to have experienced any seizures (that we are aware of). Many children develop seizures as early as 2 years old and the seizures can set them back physically and cause them to require seizure prevention medication which has negative side effects. Other kids never sleep well and end up on sleep medications. Still others can’t feed themselves or swallow effectively and end up on feeding devices.

We been able to avoid giving Anna drugs of any kind her whole life. She loves food and one of our biggest problems is keeping her away from it. Our home has keypad locks so that she cannot enter the kitchen/dining area. There are locks on all the doors inside the house to keep her from rummaging around and making an utter wreck of everywhere. She is like a two year old in a 15 year old body, always exploring, emptying, rearranging and generally entertaining herself with no thought about the poor souls who clean up behind her.

The most fun is eating out. When Anna walks by a table and snatches a breadstick out of someone’s hand, it is highly embarrassing, but the expressions on their faces are priceless. They are first in shock, then incredulous that someone would be brazen enough to openly steal their food, then they see the huge smile on her face and realize she is just enjoying life and 99% of them forgive and smile back. The other 1% is for a different story.

While Anna has cognitive delays, they do not play a big factor in keeping her in the house. She is an escape artist. Despite our best efforts she has escaped through windows and doors, has found and used keys, has distracted and conned and managed to escape on many occasions. The scariest such day was when we awoke at 7am to find her missing. We searched the neighborhood and called 911. They told us they thought they might have found her early in the morning. In fact she was being held at a nearby hospital. She had been picked up by the police on a major road about a mile and a half from home, barefoot and in her pajamas about 4:30am. It looked like she had been making a trip to Fazoli’s, her favorite restaurant.

We are not worried about her longevity. People with Angelman Syndrome have a somewhat normal lifespan. The caveat is that they are accident prone and sometimes lose their life tragically.

We are not worried about her health. We praise the Lord that other than being significantly over weight, she has no other systemic health issues.

Cure and Treatments for Angleman Syndrome

Treatments are directed toward symptoms of the syndrome and include drugs for seizure prevention, sleep improvement and concentration.

Although it is a rare condition, several research efforts are making quick progress toward a possible cure. One such method involves an attempt to activate the parental copy of the affected gene. The parental copy is often fully intact and operational, it is however “turned off” in the brain. Researchers have been able to turn on such deactivated genes in tests. Much more progress is needed to develop a repeatable approach for turning on the genes, a way to deliver drugs to the brain to accomplish the feat and tests to uncover the efficacy of turning on genes that have been turned off.

There are drugs that have been approved by the FDA for use in treating other diseases that may be effectual in treating Angelman Syndrome as well. These drugs have a variety of methodologies but some may serve to counter the negative effects caused by the missing gene. Organizations like FAST – Foundation for Angelman Syndrome Therapeutics have raised millions of dollars toward funding research that is solely directed toward curing the syndrome (not addressing symptoms). There have been many recent developments that make it appear likely that we will see a cure in the next 10 years.

Anna will be 25 in ten years. There is hope for her to have a normal(?) life! But Anna is Anna and we love her for who she is. While it is challenging to be a 24×365, lifelong, care giver, we have no regrets. Rarely does an hour go by when she does not bring a smile to our lips, if not a full blown belly laugh.