Trigger finger is a type of tendonitis (inflammation of the tendon) which is usually the result of overuse or repetitive motions. This painful condition most often affects the thumb and forefinger. When the thumb or forefinger bend, a nodule which forms on the tendon gets stuck, causing the finger to click or lock in the bent position.

The wrist, links the hand to the arm. The wrist is a complex mechanical system of 8 small bones known as the carpal bones. The carpal bones are arranged in 2 interrelated rows. One row connects with the ends of the bones in the forearm—radius and ulna. If you hold your hand in the thumbs-up position, the bone on the top of your forearm is the radius; the one on the bottom is the ulna. The other row of carpal bones connects with the bones of the palm of the hand. The joint surfaces, where the bones meet, are covered with articular cartilage which helps movement.

Knuckle cracking does not serve any beneficial purpose and may be harmful to the fingers due to the stretching of the joint capsule. The hand contains 19 bones: 5 elongated metacarpal bones, which are next to the wrist and make up the palm; 14 phalanges which make up the fingers. Each finger has 3 phalanges, the thumb has 2. These 19 bones collectively form 14 separate joints. The knuckle joints, metacarpophalangeal (MCP) joints, join the fingers to the palm. The interphalangeal (IP) joints are the finger joints. These bones are also covered with articular cartilage.

The muscles in the forearm and palm all work together to keep the wrist and hand moving, stable, and aligned. The image below shows the bones from the back side of the hand. The red lines indicate where the tendons attach the muscles to the bones. 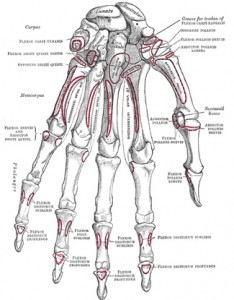 Tendons are white, flexible fibrous cords at the ends of muscles that attach the muscles to the radius, ulna, carpals, metacarpals and phalanges. When the muscles contact, they pull on the tendons to move the bone. The tendons that run down our fingers are held in place by a series of ligaments, called pulleys, that arch over the tendons forming a “tunnel-like” sheath. Normally, the tendons glide easily through the tunnel. If the tendons get irritated, nodules can form on them that keep the tendon from gliding. The nodules can pop or click as the nodules move under the ligament or even hang up causing the finger to lock. Some tendons also serve as stabilizers.

Trigger finger and thumb is a condition affecting the movement of the tendons as they bend (flex) the fingers or thumb toward the palm. A series of ligaments in a tunnel-like arrangement hold the tendons in place on the bones. A slippery coating, called tenosynovium, surrounds the tendons and keeps the tendons moving smoothly under the ligaments when the hand grasps objects.

The median, radial and ulnar nerves are the three major nerves that run the length of the arm through the wrist and down into the hand. These nerves contract specific muscles and gives us sensations of touch, and to feel hot, cold, and pain.

Triggering is usually caused from a thickening in the tendon that forms a nodule. The pulley ligament may also thicken. The constant irritation from the tendon repeatedly sliding through the pulley causes the tendon to swell and form the nodule. Rheumatoid arthritis, partial tendon lacerations, repeated trauma from pistol-gripped power tools, or long hours grasping a steering wheel can cause triggering. Infection or damage to the synovium causes a rounded swelling (nodule) to form in the tendon. Triggering can also be caused by a congenital defect that forms a nodule in the tendon. The condition is not usually noticeable until the baby starts using its hands.

With the finger straight, the nodule is at the far edge of the surrounding ligament. When flexing the finger, the nodule passes under the ligament, but becomes stuck at the near edge. The nodule cannot move back through the tunnel and the finger locks in the flexed “trigger” position and may be hard to straighten.

Trigger finger and thumb is easily seen and diagnosed on physical exam. A click can usually be felt as the nodule snaps under the first finger pulley. If the condition isn’t treated and gets worse, the nodule can swell to the extent that it gets caught in the pulley ligament locking the finger in a bent position. A locked finger or thumb is usually diagnosed as Trigger Finger or Trigger Thumb.

Unfortunately, a physical therapist can do little once a finger or the thumb develops triggering. A cortisone injection into the sheath may stop the triggering by reducing the inflammation and shrinking the nodule, but this treatment probably won’t last. The usual treatment for a trigger finger is surgery to open the pulley that is obstructing the nodule and keeping the tendon from sliding smoothly.

Depending on how bad your symptoms are will determine the type of surgery your doctor will recommend. The goal of surgery is to make the tendon sheath large enough to allow smooth movement of the tendon through the pulley system of the tendon sheath. You may need to see a physical or occupational therapist after surgery to regain range of motion and to stretch and strengthen the muscles in your hand.