We have a lot of muscles in our bodies (literally, over 600). Muscles allow us to move and function. In general, they work in pairs. Usually as one muscle contracts (or shortens), the opposing muscle (known as the antagonist) elongates and vice versa. For example, think about when you bend your arm to bring food to your mouth. Multiple muscles on the front of your arm shorten (biceps, brachialis, etc.) to allow for this to happen. Conversely, as you do this, the antagonist muscle (triceps) elongates.  Then when you need to straighten your arm out, the triceps will shorten and the biceps (and others) will elongate.

In this article, we introduce to you the major muscles on the front of the body.

To better understand muscles and how they work, it’s important to briefly familiarize ourselves with anatomical terms. Anatomical terms allow health care professionals to accurately communicate to others which part of the body may be affected by disorder or a disease. Ultimately, communicating using anatomical terms makes it easy to communicate descriptions of body areas regardless of the individual’s position. For example, suppose a doctor was trying to describe an area of the body to another physician on a patient who is lying face down? Anatomical terms would allow this discussion to happen with ease.

Planes are often used to describe location of structures or to describe directionality of movement. A plane is a theoretical line that divides the body. Oftentimes, these terms are used within the context of advanced medical imaging studies such as computed tomography (CT) and magnetic resonance imaging (MRI) scans.

You can see that the three basic planes (sagittal, coronal, transverse) intersect one another at right angles. For “normal” human bodies, the right and left sides are mirror images if divided right down the center by the sagittal plane as shown in the image below. 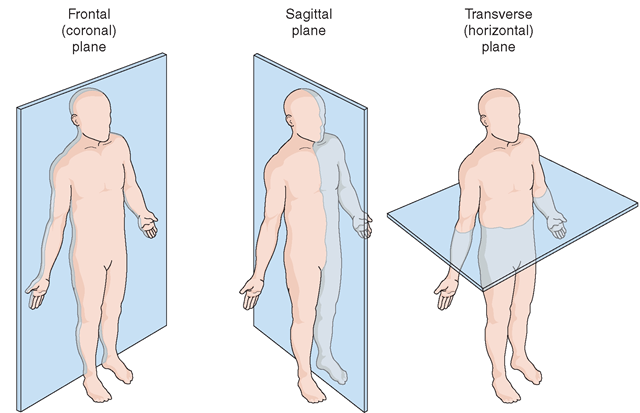 A muscle of the medial thigh that originates on the pubis. It inserts onto the linea aspera of the femur. It adducts, flexes, and rotates the thigh medially. It is controlled by the obturator nerve. It pulls the leg toward the body’s midline (i.e. adduction)

A muscle lying on the lateral side of the forearm. This muscle connects the humerus to the radius at the styloid process. It flexes the forearm. Also depending on the position of your hand, it can rotate the forearm in either direction.

The coracobrachialis is the smallest of the three muscles that attach to the coracoid process of the scapula. (The other two muscles that attach here are the pectoralis minor and the short head of the biceps brachii.) It is situated at the upper and medial part of the arm. It is supplied by the musculocutaneous nerve. The coracobrachialis draws the humerus forward (shoulder flexion) and towards the torso (shoulder adduction) at the shoulder (glenohumeral) joint.

This large triangular muscle wraps around the shoulder joint and connects the scapula, clavicle (collar-bone) and humerus. It is a 3-part muscle with anterior (front), middle, and posterior (back) heads. It is controlled by the axillary nerve.  The front fibers flex the arm and the middle fibers help abduct the arm (bring the arm away from the body). Posterior (back) fibers help to extend the arm.

The extensor hallucis longus or EHL is a thin muscle situated between the tibialis anterior and the extensor digitorum longus (EDL) that mainly functions to extend the great toe (bring it towards the ceiling). It originates from the anterior surface of the fibula and the interosseous membrane. It is supplied by the deep peroneal nerve.

This muscle arises from the lateral condyle of the tibia.  The muscle passes over the ankle under a fibrous sheath called the extensor retinaculum and divides into four separate tendons. These tendons run along the top of the foot and insert into the four lesser toes. This muscle allows us to extend our toes and our foot (an action known as dorsiflexion)

This is a diagonally oriented muscle that helps to tighten the abdomen. It’s the largest and the most outermost of our three abdominal muscles. It has limited actions in both flexion and rotation of the vertebral column. One side of the obliques contracting can create lateral flexion. It also helps in pulling in the abdomen. The two muscles on either side of the chest come together to form a fibrous sheet. These muscles help the rectus abdominis to keep the abdominal organs in place.

The large muscle of the posterior part of the lower leg. It is the most superficial of the calf muscles. The gastrocnemius has 2 heads, one originating along the outside of the head and condyle of the femur and the other originating along the medial popliteal surface of the femur. Both heads attach to the back surface of the calcaneus, also called the heel bone the heel with the calcaneal tendon, also called the Achilles. When it contracts the gastrocnemius plantar flexes the ankle bending the foot downward, flexes the knee, and allows a person to stand on tip toes. It is innervated by the tibial nerve. It’s name means “belly of the leg.”

A muscle of the hip originating on the lateral surface of the ileum and inserted in the greater trochanter of the femur. It abducts and medially rotates the by and is controlled by the superior gluteal nerve.

A long slender muscle on the medial aspect of the thigh.

– a dense band of non-contractile tissue, called fascia, that covers the gluteal region and into this tensor fascia lata of an gluteus maximus are attached. Distallly the ITB inserts into the kneecap, tibia and fibula head.

A back muscle that pulls the arm down and back. It is responsible for extension,adduction, and (medial) internal rotation of the shoulder joint. It also helps in extension and lateral flexion of the lumbar spine. The name means “widest of the back.” This muscle supports the arm when it is moved above the head. If you push your arm hard against your side, you will feel this muscle tighten up.

A chest muscle that pulls the arm in towards the body. This is one of the internal rotator muscles that attach the humerus and internally rotate the arm. The pectoralis major originates along the clavicle, down the sternum, and across the ribs and inserts into the humerus. This muscle can contribute to excessive internal rotation of the arm or scapular abduction.

Fibularis longus muscle. A muscle along the outside of the leg that bends the foot out at the ankle. The fibularis longus originates from the head and upper lateral surface of the fibula, runs in a bony groove along the bottom of the foot to attach on the other side at the base of the first metatarsal and the neighboring medial cunieform bone, and acts to evert the foot; it is innervated by the superficial fibular nerve.

Aalso known as the “six pack”, is a paired muscle running vertically on each side of the front wall of the abdomen. There are two parallel muscles, separated by a midline band of connective tissue called the linea alba. The rectus abdominis is an important postural muscle. It is responsible for pulling the rib cage toward the pelvis. The rectus abdominis helps when we exhale while breathing and forcefully exhaling. It also helps in keeping the internal organs intact and in creating pressure inside the abdomen, such as when exercising or lifting heavy weights, during forceful defecation or pushing during childbirth.

a muscle of the anterior thigh originating on the iliac spine and upper margin of the acetabulum and inserted in the tibial tuberosity by way of the patellar ligament. It extends the leg, contributes to flexion of the thigh, and is controlled by the femoral nerve.

A long, ribbon-shaped muscle in the leg that flexes, abducts, laterally rotates the thigh, and flexes the lower leg. This muscle, the longest in the body, enables the crossing of the legs in the tailors’s position, the function for which it is named. It is strapped shaped and winds across the front of the thigh, from the hip to the inner side of the tibia. When it contracts it bends and rotates the thigh.

is a paired muscle in the superficial layers of the front part of the neck. It tilts the head to its own side and rotates the head so the head faces the opposite side. It is also an accessory muscle of breathing out and raises the sternum.

originates on the anterior portion of the iliac crest and ASIS and inserts into the ITB. It flexes, medially rotates, and abducts the leg and can cause pelvic rotation problems.

is a muscle of the arm and one of six scapulohumeral muscles. It is not part of the rotator cuff. The teres major is a medial rotator and adductor of the humerus and assists the latissimus dorsi in drawing the previously raised humerus down and backward (extension, but not hyper extension). It also helps stabilize the humeral head in the glenoid cavity.

An extensor muscle that straightens or lifts the foot. A muscle of the leg originating on the lateral condyle of the tibia and the interosseus membrane between the tibia and the fibula and inserted in the first cunieform and first metatarsal bones. It dorsi flexes and inverts the foot, supports the arch, and is controlled by the deep peroneal nerve.

A muscle of the anterior thigh originating on the linea aspera and the greater trochanter of the femur and inserted in the tibial tuberosity by way of the patellar ligament. It extends the leg and is controlled by the femoral nerve.

a muscle of the anterior thigh originating on the linear aspera and inter-trochanteric line of the femur and inserted in the tibial tuberosity via the patellar ligament. It extends the leg and is controlled by the femoral nerve.

Closer to the midline, that is – the elbow is distal to the wrist.

Movements that bring limbs towards the midline. For instance, bringing your arm down to your from sideward extension is adduction.

To abduct a limb or to move it away from the midline. Lifting the arms sidewards from resting position is an example of abduction.

Shortening of a muscle. Flexion will often bend a limb, such as when flexing the bicep, thus bending the elbow.

Movement that occurs in the horizontal plane. For instance, when the arms are at rest at a person’s sides, external and internal rotation will supinate or pronate the hands and forearms.

The distal attachment of a muscle. The insertion is the segment that moves during muscle flexion. For instance, the bicep inserts along the radial tuberosity. When the bicep is flexed, the radius or forearm moves towards the upper arm.

The proximal attachment of the muscle, often considered the anchor of movement. For instance, the bicep originates from the scapula and shoulder. Thus any movement performed by the biceps will bring the insertion closer to the origin.

Nerve supply of a muscle. Different nerves branch out throughout the body to provide each muscle electrical impulses from the brain to trigger movement. 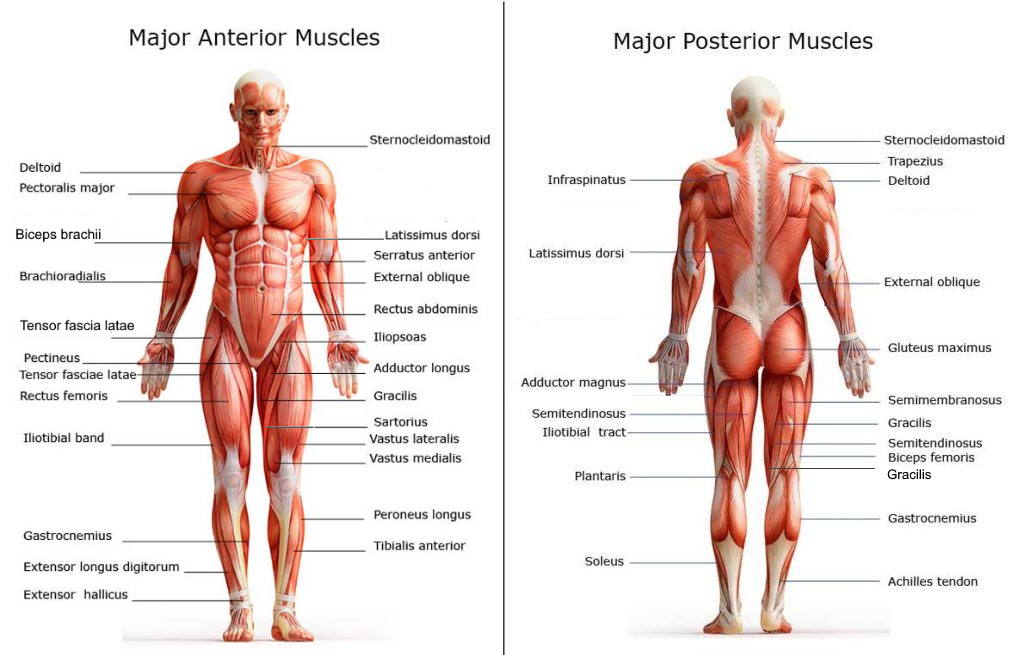